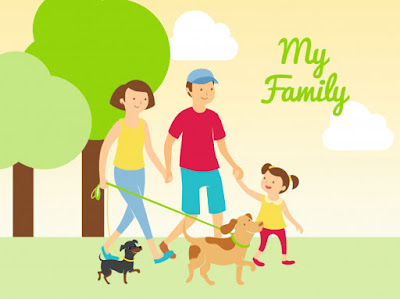 Nunu is my pet’s name. He is a male fluffy kitten. He has greyish-brown fur all over his body and tail. He has black stripes over his front and hid leg. His eyes’ color is black and his nose is also black. He has short little tail. He has a pair of black triangular ear. Although he has claws on his feet but he isn’t harmful.

I feed Nunu regularly, three times a day. He likes most food I give to him, such as salty dried fish, raw and cooked fish and meat, or even chicken and fish bone. He only drinks freshwater as I never give milk to him.

I train Nunu to keep his cleanliness by providing him litter pan. Sometimes, I also wash him to make him clean. I usually play with him by using a piece of paper that I tied by yarn. When I pull the yarn up and down, the moving piece of paper will attract him and he will chase it. He is so amazing with his playful habit. I will look after him until he grows to be an adult cat.

Moli is the name of my pet dog. He is a male puppy. His fur is short and soft. I got him from my father as a birthday present. He has white fur over his legs and neck with black mark over his back and half of his tail. Brown fur covers both his ears, around eyes, and also both sides of his head. He has black nose. He is small and short, it makes him looks so adorable.

I usually feed Moli two or three times a day. He loves to eat meat, bone, fish, whether it’s raw or cooked. But his favorite one is fried chicken. So, every time I eat fried chicken, I always share half for him. He looks so happy when I give it to him.

Moli is friendly and companionable puppy. He likes to be taken for a walk to the town park. He always plays there, running here and there, or chasing for bug and dragonfly. Sometimes, he also likes to play in dirt but it doesn’t matter because I always wash her after that to keep him clean. I loved my young dog, Moli.

I have a lovely canary bird. His name is Kanari. He is fluffy little bird. His head and breast are covered by bright yellow plumage, and his wings and tail feathers are greenish-yellow. He looks beautiful with all those colors.

I put Kanari into a medium bird cage to give him some free space. I usually feed him two times a day. Sometimes I feed him bird food, larvae, crickets, or grains. He likes larvae and cricket most. I also provide him a little freshwater in a small container inside his cage to let her drink. Every morning I place his cage outside in front of my house to keep him warm. He is a great songbird. I love listening to his chirping, it’s so beautiful and pleasant.

I have some goldfish at home. They are small-sized goldfish. They have different color, three of them have yellowish-red scale with some black marks and the rest have grey scales with reddish-black marks. They all have white tail fin.

I put them in a small pond at my backyard. I also put some lotus there to let them play around. They are so healthy and active fish, swimming over there and here. I feed them by pouring their food right into the fishpond. They like to eat fish food and worm. When I give them their food, they swim and came to me. It makes me happy when they are all swimming around me.

I have a pet. It’s a fat cuddly rabbit. My rabbit is a female. I named her Nyinyis because she is adorable with her chubby cheeks. She has a pair of white, long ears. She has clear red eyes. She has white fur all over her body with few black and brown spots. Her fur is very soft, that’s why I love petting her.

Nyinyis loves to eat most of vegetables, grasses, and fruits. She can eat a lot of vegetables and grasses in a day. I usually feed her by holding his food and facing it to her mouth. She looks so lovely when chewing her foods.

Nyinyis is a playful rabbit. She likes to jump here and there. She can jump high dan fast. I often play with her in my spare time, running and catching her in my backyard. Sometimes, when I let her free in my backyard, she also likes to dig the ground. I think it is her natural instinct for make a nest in wild. I love Nyinyis and will take care of her well.

I raise them for their egg and meat. Each hen usually lays 8 to 12 eggs within 3 weeks. Their eggs are smaller than typical egg that are available in grocery store and has a characteristic of its white shell. My family often consumes the egg for breakfast; it tastes great and healthy.

I keep all chickens in my backyard which is directly connected with the rice field. I feed them about two or twice a day, usually in the morning, day, and afternoon. Their food usually consists of bran, stale rice, or anything left from our daily food. Besides giving regular food to them, I also let them roam freely around my backyard and rice field so they can find additional food from there.

The adult chickens will roost on higher place at dusk such as the backyard roof or bamboo fence, while the young chickens, less than four months, will be placed in a wooden box to keep them safe from the rats. It may look so complicated, but it is worth if I don’t want to lose any of them.

I have 16 ducks, about 10 of them are hens and other ducks are drake. Their feathers are grayish brown with few white feathers. Their bills are large and black. Their webbed feet are short and black and it makes them waddle when walking.

I raise my ducks mainly for their egg and also meat. I keep them in my backyard. I let them to roam around freely. I give them food two or three times a day, mainly from rice bran. Their favorite food is snail. Usually they look for the snail on the rice field or stream nearby.

I have two cattle, one cow and one calf. They actually belong to my father. They have brown coat with some black spots. The cow has been raised for about two year and the calf is only three month and still drinks the mother’s milk.

My father keeps them in a small barn in the backyard. He rarely let the cow roam freely, but occasionally when the grass is abundant nearby in rainy season, he let them roam around to graze. While in summer, my father looks for the grass farther in the woods or on the river bank near.

My father raises the cow only to sell, so we never take the milk or the meat. Usually, when the cow already gave birth to a calf, we’ll raise the calf and sell the cow. Sometimes we also keep the cow to get more calf.

My grandfather has a buffalo. It’s a male buffalo. It has two backward horns and the horns’ colors are dark grey. Its coat is black all over the body. It has large body and strong. It has four powerful feet with black hooves.

My grandfather often takes the buffalo to the field and let it grazing there. It also likes to be in water. It can spend few hours only to play around on the river. As a farmer, my grandfather used to use the buffalo to plough the rice field. However, as the time went by, now the buffalo has been replaced by a machine. He still keeps the buffalo but not for farming, only for sale.