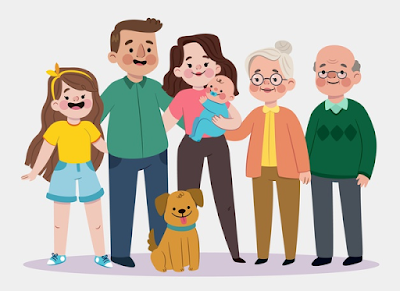 live with my little family. It consist of four members, there are my father, my mother, my older brother, and of course I as the youngest family member.

My mother is middle-aged woman, now she is about 48 years old. Her name is Mrs. Khomariyah. She has beautiful face and black long straight hair. Her eyes just like ordinary Asian woman, black. She is a bit fat because she rarely does exercise as a busy housewife. However, she can manage her dress well, so he can keep looking good on all her dress.

My father is Mr. Jono, he is about 51 years old. Although now he isn’t young anymore but his hair still looks pretty good in black with few grey hairs. His eyes are black like most Asian, especially Indonesian people. He is relatively tall compared to all the family members, about 168cm. He is working on local wood manufacture as the manager. He works hard for his family. Sometimes he also makes tasty meal when my mother isn’t home. I love his cooking, especially the fried rice, it’s just like the yummiest fried rice I have ever tasted.

Then the next family member is my older brother, he is Wahyu Budi. Now, he is 23 years old. Just like my parent, my brother also has black eyes and black straight hair. He is taller than me, he is as tall as my father. He is quite smart, diligent, and helpful person. Now he continues his study in learning English and he hope someday can be a good teacher.

All of my family, but me, can speak both Javanese and Sundanese fluently. We had been lived in Bandung, precisely in Leuwiliang for about 6 years. Unfortunately we had to move to Surabaya for some reasons when I was 2 years old. So, if they’re talking in Sundanese I have no idea what they are talking about. Now, we have to live our life in here, my beloved city Surabaya.

My mother is a quite pretty woman. She has a proportional appearance; she isn’t tall but not too short for about 155cm. Her hair is long, a bit wavy and its color is black. She has black eyes and light brown skin. When she smiles, she looks prettier.

She is known as a nice people by people around her. She is also attractive, smart, friendly, and always try to help people around. I love her very much because she is a living figure to me to be a good person. My mom love listening to the music, especially Dangdut. Whenever she cooks in the kitchen, she always listens to the Dangdut music and sings along with it.

She is known as a nice people by people around her. She is also attractive, smart, friendly, and always try to help people around. I love her very much because she is a living figure to me to be a good person. My mom love listening to the music, especially Dangdut. Whenever she cooks in the kitchen, she always listens to the Dangdut music and sings along with it.She is a complete person, a good mother and wife. Every day, she takes care of us with all of her warmth love. She manages the house well, keeps it clean and in good order. She doesn’t like if any stuff in our house misplaced, everything has to be where it should be placed and don’t mess around.

She spreads her smile all the time to everyone. With the smile on her face, she looks gorgeous. Behind her beauty, she is a great woman for my family. She is strong woman who help her family whenever we face a problem. Best mom ever who give all her love for her family.

My father is Yayan Hariadi. Now he is about 43 years old. My father is a good-looking person with his ideal appearances. His nose is pointed. He has thick eyebrows and oval shaped face. Her skin is dark brown since he spends a lot of time working in the field. He has strong arms and legs because he does such heavy work routinely.

He is a farmer. He manages his farm well. He plants a lot of vegetables, such as cucumber, tomato, chili, and also rice. Since we live in a good place to plant many vegetables, my father doesn’t meet any difficulties in getting a good corp. Even though many people underestimate such profession but I’m proud of him. Without farmers who produce a plenty of food to support the people, there will be a lot of people who suffer in starvation.

One of my father’s hobbies is fishing. He likes to spend a couple hours jus for waiting a fish catches his bait. Most people think it is boring, but for my father it’s like the best activity to do in his spare time. Besides that, my father love listening to the music. Traditional music is a genre he likes most, such as Campursari and Tayub. He also likes traditional puppet show or called “Wayang Kulit”. He loves local cultures. He ever said that local culture is our identity; if we lost it then we lost our identity.

I have an older brother, his name is Wahyu Riskianto. I and my older brother have couple things in common. Both of us have short straight hair. My brother and I also have the same a bit round shaped face, thin eyebrows, and black eyes' color. We both have a bit tanned skin since we like to play football together. With all those similarities plus the fact that we are just 4 years different, no wonder if many people think that we are twin.

My brother is an introvert person. He doesn’t talk too much to any person who doesn’t close enough to him. Most of his time, he spends to learn and train his skill in his hobby. He loves painting and drawing picture. Usually he draws caricature or beautiful view. I like his artworks, it is pretty colorful and attractive.

My brother is a patient and kind person, especially to me. He always helps me when I have a problem. He is quite smart person also. So, when I find some trouble in doing my school tasks, like mathematic or science, I always ask for his help. We also like to spend the time together by playing game. In short, he is the best brother in the world to me.

My little sister is Rika Suci Wardhani. I usually call her Aci. As a little girl she is very cute and adorable. The next two month she will be 5. She is the youngest of three siblings. She is a little bit fat and has chubby cheeks. She has long black and a bit wavy hair. Her eyes' color are black too and her skin is light brown. With her wide-opened eyes and chubby cheek, she makes every person want to pinch her adorable cheeks.

My sister is an active girl, she always playing all day long. Usually she plays doll with her friends. She is a kind girl, so no wonder if she has a lot of friends. She also feels curious about anything new to her, such as asking what does the sign on the street means or how rainbow happens. Sometimes all of her questions are annoying for me, but I know she is going to grow to be a smart girl. She loves to eat, especially candy and snack. That’s why she has those chubby cheeks. She likes most all food, but her favorite one is fried chicken. My mother often cooks it for her. I love my little sister very much because she is the only one annoying cute girl in my family.

Borobudur Temple is an immense ancient monument that lies near Magelang, Central Java, Indonesia. The temple fuses the symbolic appearances of stupa (a shrine mound of Buddhist which is typically containing sacred relics), the mountain of temple (based on Hindu mythology, Mount Meru), and the mandala (a spiritual Buddhist representation of cosmos that fuses the rectangular part as world and the circular part as paradise). The Borobudur’s style was profoundly influenced by Gupta architecture from India. The temple was designated as one of World Heritage sites by UNESCO.

The Borobudur Temple was built between the year of 778 and 850 AD, under the dynasty of Shailendra. It was deeply buried under a layer of volcanic ash and overgrown by plants for about several centuries, until discovered in 1814 by Thomas Stamford, an English lieutenant governor. The restoration was performed by a group of Dutch archaeologists which took 4 years, starting from 1907. The subsequent restoration was ended by 1983.

The construction of the Borobudur Temple took about 56 thousand cubic meters of ashen volcanic stone. The temple is designed alike a stepped pyramid that consists of three main levels, surrounded by a small hill. These levels are comprised of a rectangular base, 5 rectangular terraces at the middle level, and 3 circular terraces at the upper level. The center part is 35 meters above the bottom level which contains of a major single stupa.

Each of all three major levels of the monument represents a phase of way to gain the ideal enlightenment of bodhisattva. The spiritual journey is symbolized by the east section stairway, where the pilgrim begins, and walks clockwise round every single of the nine levels of monument before getting the top which takes about 5 km distance.

The lowermost level of the temple, which is somewhat hidden, contains several hundreds of worldly desire’s reliefs. These reliefs illustrate kama-dhatu or the realm of sense which is known as the bottom-most sphere of Mahayana Buddhist universe. On the next level, there will be a sequences of reliefs portray rupa-dhatu or the middle sphere and realm of form which tells the complete events in Gautama Buddha’s life and the scenes from Jataka (his previous life’s story). The three upmost levels portray arupa-dhatu or the realm of amorphousness which means disengagement from the physical world. This level contains a little decoration; however the terraces are lined by 72 bell-shaped stupas. Most of these stupas still contain a statue of Buddha which is fairly observable through its perforated stonework.

During the annual ceremonial of Waicak throughout full moon, there will be more than a thousand Buddhist monks in saffron-robed who walk solemnly in the procession to Borobudur Temple to venerate the three phase of birth, death, as well as enlightenment of Buddha.